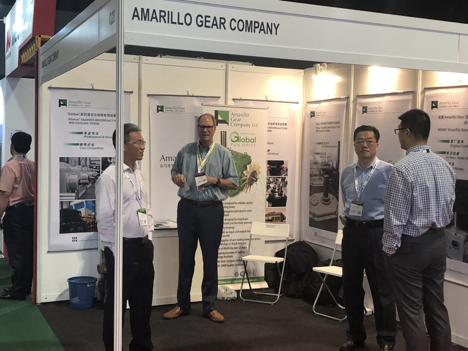 Amarillo Gear & Amarillo Gear (Jiangsu) recently participated at the Power-Gen Asia Conference and Exhibition in Kuala Lumpur, Malaysia. There were more than 11,000 attendees and 350 exhibiting companies from around the world, but most exhibitors were from ASEAN countries, China and South Korea.
Amarillo Gear personnel attending the conference included Kevin Chang (AGC Taiwan Office), Lawrence Lan (AGC China Office), Snow Jiang (AGJ GM), Bob Neely (AGC Cooling Sales Manager) and Steve Chaloupka (AGC Sales Director). Seven of our key OEM customers were also exhibiting who manufacture wet cooling towers and air-cooled condensers.
The 2019 Asian economy has been negatively impacted by the US-China Trade War that you all are aware of. There is a saying in Asia; “If China catches the flu, all of Asia catches the flu”. After just over a year of tariffs between the US and China, confidence in Southeast Asian countries is increasing and the economy in this region (outside of China) is rebounding, with 2020 outlook much better that 2019.
This is very good news for Amarillo Gear in that Southeast Asia is our #1 export area and our most strategic region. There are many new power plants planned in the next 5 years to accommodate emerging 3rd world countries like Cambodia, Vietnam, Bangladesh and Indonesia.
Another growing key market for Amarillo Gear is HVAC, being used at microchip manufacturing plants and data centers that are popping up everywhere across Asia.
Unfortunately, markets in China are going to remain depressed until a settlement of the trade war between the US and China is realized. It is negatively impacting China, and unfortunately having a negative impact on the general population of China.